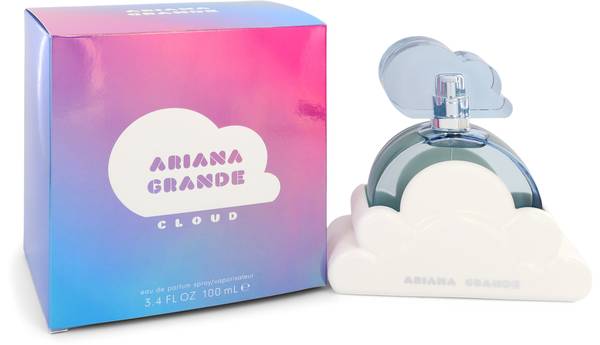 Ariana Grande is one of the world’s most successful pop stars. She has several perfumes, including Frankie, Ari, Sweet Like Candy, Moonlight, and Cloud.

Ariana’s perfume, Cloud Eau de Parfum, is one of the most popular, top perfumes for women on the market today. As of today, Cloud defines Ariana’s path of fragrance success. The scent recently won the Fragrance of the Year award from the Fragrance Foundation Awards.

Ariana’s perfume success is no surprise given her widespread popularity in the entertainment world. She’s headlined Coachella, she’s headlined a world tour, and she even “headlines” her own Starbucks drink, the Cloud Macchiato. It’s a sweet drink, surprise.

In September of 2018, Ariana alluded to the idea that she was considering breaking into the fragrance sector. Nearly a year following, Ariana launched Cloud alongside Ulta Beauty. The perfume has been nothing but a success since.

In some ways, Ariana follows in fellow pop star icon Britney Spears, whose fragrance “Prerogative” has become a famous perfume. However, the embattled former pop icon is currently in a contentious fight with her Dad, James Spears, over a decade-old conservatorship, so we aren’t sure how much of the fragrance profits Spears sees.

In the case of Ariana, we will assume she’s reveling in all her perfume success, cash included.

Ulta describes Ariana’s Cloud as an “uplifting scent that imbues a thoughtful, artistic expression of positivity and happiness.”

We aren’t sure if Cloud will turn you into a ballerina or painter, but we are sure it smells pretty good (and maybe happy).

Let’s get down to the brass tacks, shall we?

First and foremost, Ariana’s Cloud has exceptional and impressive longevity. Hours after its application, Cloud remains a force of fragrance nature. However, it doesn’t impose itself or command attention; instead, it’s a passive, playful backdrop that’s as flirtatious as it is enticing.

Cloud leverages pear, lavender blossom, and bergamot as its top fruity inspirations. The base is blonde woods and musk.

Ariana’s Cloud continues to draw an increasing amount of interest. This is because some major fragrance reviewers recommend the scent among some of the best perfumes for women. In fact, a former Allure fragrance reviewer has commonly listed Cloud in the ranks of women’s top perfume recommendations. Because Ariana is a pop star icon, some might classify her as “cheesy,” we don’t expect a genuinely iconic fragrance. However, her name alone would move millions of perfume bottles even if the contents of those bottles were a blend of oregano and fish oil.

But that’s not what happened here. Ariana did leverage her name, but she seemingly wanted to make sure her name was associated with a high-class yet affordable fragrance endeavor.

When you initially apply Cloud to your skin, the fruity notes rise into your nostrils. It’s appealing and blissful. But as time wears on, that musky orchid underbelly of the scent takes the helm. And that’s a beautiful thing. Cloud lasts throughout the day; it doesn’t overwhelm, instead, it projects subtle inspiration until your head finally hits the pillow.

Cloud smells refreshing. It doesn’t overwhelm the senses in the “this person is wearing some strong perfume” way. Some people may think that’s your fresh self. In the end, the perfume shouldn’t make itself obvious, instead, stay within itself and act as a passive, subtle addition to a person’s being.

While many celebrity perfumes fade away after the masses figure out the gig, Ariana Grande’s Cloud seems to be headed for long-term success. It’s one of the best perfumes for women of all ages. For Ariana, her future in the world of fragrances seems positive.